If you like the sound of a gaming phone and live in North America, this news should excite you. The 5G enabled ASUS ROG Phone 3 has just passed through the FCC and appears poised to hit store shelves in the US and Canada.

On September 22, 2020, a device identified as ASUS_I003D passed through the FCC which is indeed the ROG Phone 3. The more common model number is ZS661KS for the ROG Phone 3. 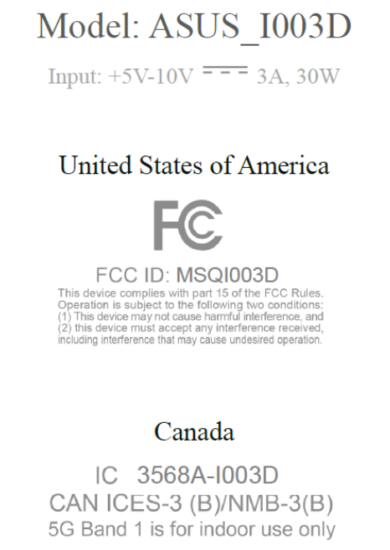 We have tracked our fair share number of ASUS devices over the years, in particular when it comes to US and Canada release dates. When it comes to a FCC appearance, we’ve never seen any ASUS product start shipping in North America within one month. If we’re being realistic, it could be up to two months. It would not surprise us to see the ROG Phone 3 on store shelves in late October or early November.

The ROG Phone 3 brings a lot of similar looks and features of last year’s model. Same 6,000mAh battery and same gigantic 6.59-inch AMOLED display. No headphone jack this year, so keep that in mind. There are improved cameras and the audio is said to be the best of any smartphone on the market today. Accessories from ROG Phone 2 are compatible which might explain some of the sameness when it comes to sizing and dimensions.

Speaking of accessories, ASUS has updated a number of them. Included in the ROG Phone 3 box is the AeroActive Cooler 3 (works as a stand and has headphone jack) and USB-C headphone jack adapter. Sold separately, there is a TwinView Dock 3 (provides a second AMOLED display), Lightning Armor case, ROG Phone 3 game clip, Kunai 3 Gamepad, ROG Phone 3 Clip, Neon Aero case and mobile desktop dock. Clearly no shortage of options!

What network bands will the ROG Phone 3 North American variant have? We can share this screen grab for you, but these are not “official” bands but could be close:

No word on pricing for the US and Canada markets. With the 5G onboard, expect this to be more expensive than last year’s ROG Phone 2 which cost $899 USD for the 12GB/512GB model. The ROG Phone 3 Stix is a cheaper version and it’s unclear whether ASUS will bring only one model, or offer up the flagship and the Strix to North America. Our guess is there will be only one model.

Pre orders shouldn’t be that far off regardless if it’s one month or two months from actually shipping in Canada and the US. The ASUS US online store will likely have stock first and in Canada, Amazon was a primary retailer for the ROG Phone 2. We expect the same retail options this time around. Stay tuned for updates, especially for pricing news!