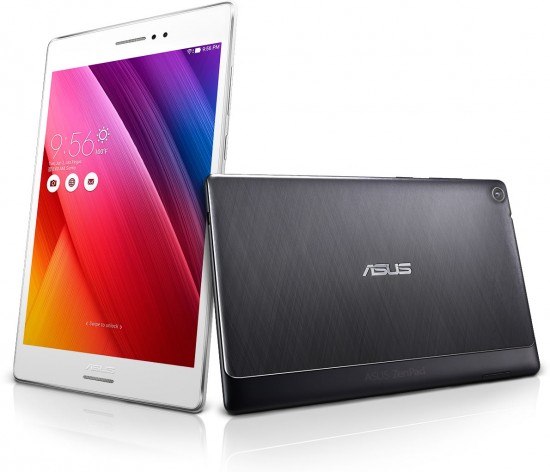 We’ve long known about the ZenPad. Asus did mention that they were rebranding their tablet line-up to a more refined and simple “ZenPad”. However at the time of this original news, things got lost in translation and most every report was inaccurate. All that behind us, Asus has finally made the ZenPad tablets official at Computex 2015 in Taipei. We will give you a rundown of what they have announced and whether or not there is something here that you can be excited about.

We will suggest right now that the iPad mini has a real threat. In terms of Android tablets, this ZenPad S 8.0 is going to be hard to beat. It’s 8-inch, have stereo front facing speakers, has a stylus pen input also. We should also mention it has 4GB of RAM and one of the fastest mobile processors on the planet right now.

Although lesser specs, expect the prices to be pretty cheap on these standard type Android tablets. There isn’t anything eye popping in terms of specs, but there are a host of cool accessories that may impress you. The people looking for a Transformer device from Asus will need to look at the ZenPad 10 because it’s the only model with the keyboard dock. However, it’s more built for audio and doesn’t have a trackpad or battery like the Transformer Pad tablets in the past. Overall though, we like the front facing speakers and accessories for this line-up.

The ZenPad C is for the cheap, low-end spec tablets. We don’t imagine these will end up in the Canadian or USA markets. I do scratch my head at the resolution, especially when you consider it’s half way to 2016.

Thoughts On The ZenPad Unveil

Asus needs to hit a home run with the ZenPads. They have remained with a small market share, which may largely be due to their lack of market presence in North America. Asus has promised quite recently that there will be fewer tablet models and fewer countries getting them. This in turn should mean better customer service, warranty service and in-stock units and accessories. This will be a big push for Asus and their only real failure will be a long delay from this unveiling to when people can actually buy them in-store.

Drone regulations and rules – It’s going to stunt the growth of this technology
Samsung Galaxy Tab S2 8.0 and 9.7 – Pre Order – Where To Buy