By President, Techaholic Inc. on December 28, 2015 in Movie Reviews, Movies 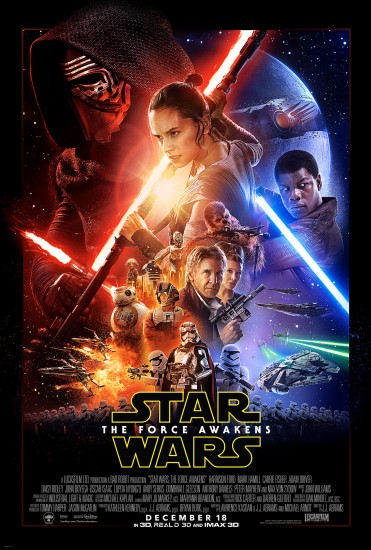 I promise not to spoil any surprises or details that are part of Star Wars: The Force Awakens. I am of the belief that movie reviews are for those people wondering if a particular movie is worth paying for. Spoiling surprises isn’t what you’re really looking for is it?

Most reviews that I’ve seen for The Force Awakens spill far too many details and will ultimately diminish your viewing experience. This is true of reviews that make false claims to be spoiler free. Be careful what you read out there!

I will preface my review by saying that I was lucky to see it on the opening Friday night. I did not read a single article prior to watching. I did see the official trailers, but that was it. Everything else was a complete surprise.

Depending on what you’ve seen or read prior to watching the movie for the first time, I would think that the experience will be slightly diminished. The more you know about characters and plot lines, I’m sure there will be some enjoyment lost. This is why I’m urging friends to watch Star Wars: The Force Awakens as early as possible to hopefully avoid losing some of the purity of the viewing experience.

So if you want a quick answer to the question about whether The Force Awakens is worth paying for, I can summarize my response in one word. Yes. It is absolutely worth every penny. I will go further by suggesting that you run rather than walk to the theatre to see it.

Rarely are movies an event. Rarely can highly anticipated movies deliver on the expectations of the audience. Rarely do movies like Star Wars: The Force Awakens come along. This is one special movie that delivers in every conceivable way.

Is it perfection? Nothing is every perfect but I would suggest that this is pretty close to hitting every mark that I personally want from a theatre viewing experience. I want something that moves me, entertains me, and makes me feel like I’m in a difference place. Non action films have their rightful place in theatres, but this is Star Wars we’re talking about. Big sound, big screen, big experience.

I will confess that I enjoyed this movie so much that I did not want it to end. I actually lost track of time in the theatre and had no idea whether the movie was coming to an end or whether there would be another sequence. This alone should be an indicator that the movie is captivating to the point where you’re pretty much in another dimension. It’s a real escape that you are rarely going to experience in a movie.

Most likely you’ve seen the previous Star Wars movies, in which case there is a familiarity to many moments in the movie. There are also some very funny moments thrown in for those of us with memories from the originals. There is a perfect mix of the old with the new.

The expression, the apple doesn’t fall far from the tree, applies here. If you are hoping for a completely fresh, unrelated, and unique Star Wars movie, then The Force Awakens might not satisfy you completely. There are parallels to the originals and this movie doesn’t shy away from those influences. If you think a lack of originality is bad, then consider how the most recent Star Wars movies fared when they went out on their own. Faring not so well might be an understatement. I don’t take lack of originality as a negative, especially considering that the original Star Wars movies were masterpieces in their own right.

Clearly Star Wars has learned from the recent past. The acting performances in The Force Awakens are near perfect. Action is one thing but being able to deliver characters and creating relationships that make sense is a tricky situation, especially with a fast paced movie like this. The acting compliments the action in this instance and is able to balance both aspect of the movie.

I should mention pace. The movie teeters on moving too fast as the story and events progress quickly in the early stages. I’m sure you can think of many movies where aspects feel rushed and unnatural. This situation can lead to eye rolling and less believable moments. The Force Awakens manages to create relationships among the characters while keeping a breakneck pace, especially at the front end of the movie. I would consider this aspect a major feat. If you don’t believe is what you’re watching, it can take away from the rest of the movie. Thankfully the movie manages the pace and story without losing the believability factor.

Perhaps you’ve been skeptical of 3D movies in the past. I’m one of those people so don’t worry. Without hesitation I say open your wallet and put out the money to pay the extra price. Make an exception because you won’t regret it. In the case of Star Wars: The Force Awakens, there was only the option of 3D when I purchased my tickets and in hindsight I’m grateful that I didn’t have a choice for non 3D. You want to experience this movie in a way that you can savor every bite and see the true depth of the Star Wars universe.

I think of the 3D element of The Force Awakens as being like Star Wars 2.0. It’s a way to take you inside the movie and into places that you’ve seen before in the other Star Wars movies. The 3D technology is just so good that you can gain a whole new level of appreciation of the Star Wars characters and world. Instead of being on the peripheral, you’re actually right there. The details are spectacular!

I can say that The Force Awakens is an ideal for what a movie experience should be in terms of delivering something magical and entertaining. Most action movies pale in comparison to this. When there is a lot of pressure on delivering a sequel or continuation in a movie series, often times that expectation leads to disappointment. When a lot of time, effort and money is put into a movie it doesn’t automatically mean success. So for me, this is a brilliant example of when everything comes together in a package that is simply magical and worthy of a second viewing. There was a ton of pressure on Star Wars: The Force Awakens especially when you look at the absurd amount of marketing and advertising.

Best movie ever? I would say based on the sheer thrill of it, I left the theatre saying to myself this is one of the best movies I’ve ever seen. For me, this movie is what going to the movies is all about. In fact it was more than just a movie, it felt like an amusement ride. Few movies I can recall have ever given me this feeling. A couple of younger people joined me on opening night to watch also. Although they have a shorter history of watching movies, they left the theatre saying this was their favorite movie ever.

Go see it. Enjoy it in 3D and savor as many details as you can. You may just need a second viewing to fully appreciate all the details and action that is packed into Star Wars: The Force Awakens.