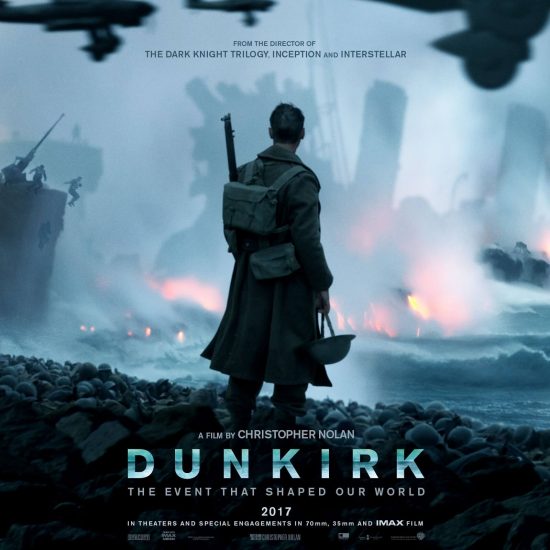 There is enough going on in Dunkirk to make it worth your while. But those trailers claiming greatness? Indeed those are very much overstated. When the poster says “the event that shaped out world”, it’s almost laughable. In theory that might have been the plan, but this movie fails to capture the emotion or magnitude of this event.

In a strange way, the movie peters out as it moves along. I was expecting an emotional story, but it just didn’t pull me deep enough in. Instead of moving towards a climactic moment, it just felt like it just didn’t get there.

I realized afterward that there was very little dialogue in the movie. It’s hard to attach yourself emotionally to characters without dialogue and if you don’t believe me, then watch this movie and you too shall see what I mean.

There are multiple stories going on in Dunkirk. This keeps the story bouncing around which isn’t necessarily a bad thing. In the end though, this broken up approach doesn’t quite come together in any impactful or meaningful way.

There is nothing fake looking or feeling about Dunkirk. You get a true sense of the technology (or lack thereof) and the challenges that were faced during that era of war. There is no CGI nonsense going on here. For the most part, realism in Dunkirk was spot on. It’s believable because it has a realistic look and feel which makes this an authentic war movie.

There are plenty of sequences within Dunkirk to jolt you and give you some greater appreciate for what fighting in war can be like. This movie covers it all. Land, sea and air action sequences can be experienced in Dunkirk.

In particular the airplane sequences are breathtaking. Those alone are almost worth the price of admission. Sure we are used to Star Wars and space ship battles, but Dunkirk nails the true difficulty and challenge of a dog fight in fighter planes. It’s not often you are going to experience being in a cockpit this way, but Dunkirk manages to put you there in the heat of battle.

It’s worth noting that this is a war movie that is light on the blood and guts. If you are leery of watching a Saving Private Ryan type movie, fear not. That’s not what Dunkirk is all about. There is carnage but it’s minimal to the point I’m hard pressed to think of many sequences that dealt with severe wounds or blood. It may be the least graphic war movie that I’ve seen and proves that it’s not a mandatory requirement for this genre of film.

The departure from Dunkirk was a historic, monumental event. However the movie just wasn’t able to capture the scope of the retreat or make it feel dramatic enough. The movie felt like it just scraped the surface on the collective retreat effort.

I certainly found Dunkirk to be good, but I didn’t leave the theatre thinking I’ve watched the best war movie ever. I loved the terrific realism and sometimes breathtaking scenes, but I found the emotional attachment to the characters and event to be lacking. It’s just not a perfect mix of action and story.

Should you go see Dunkirk? Yes, but have modest expectations. Great visuals yes, but mediocre everything else. Big screen cinema is where Dunkirk really shines. In a home environment you’re going to miss out on some of the captivating action sequences so go now and watch Dunkirk on a big screen with big audio to get that realism and thrill.