By President, Techaholic Inc. on August 1, 2016 in Android, Opinion, Rumors

The world famous leaker of tech @evleaks has recently tweeted that the Nexus 5 will not get the impending Android 7.0 Nougat update. Should we believe him? Afterall, he’s famous for being right about information prior to that information being officially released. For the sake of this discussion, let’s assume that he is correct. If it turns out he’s wrong? The article will be banished! I still see value in this discussion because it’s about device longevity and device support. This type of situation will happen in the future so it’s worth discussing now.

I’m an owner of a Nexus 5 so I have a good perspective and vested interest in Google updates. This was a very popular phone so not getting Android 7.0 Nougat is going to affect a great number of people.

So let’s talk about why. Why do people buy pure Android devices from the Nexus line-up. It’s the updates right? We get them first! It’s the selling point afterall.

People are quick to say that the Nexus 5 got 3 of the Android updates and that should be sufficient. Sound like an apologist to me though. This phone will  be less than 3 years old and Google will have deemed it dead? See, when a company says it’s the end of the road in terms of updates, that’s a dead phone. That’s the end of support. Sure we will get security updates and you bet they wouldn’t try and drop that support.

It appears that Android 7.0 Nougat is going to have big new features. The kind that are game changing. The ones that matter. The best update and Nexus 5 owners are out of the loop? I would argue that most of the previous 3 years of Google updates have been meh. I can’t say one feature that has changed my life at all from those few updates. When Android was first launched, of course the updates were huge and game changing. Lately these updates have been tweaks here and there. People rant about not getting new Android versions on their non Google devices but I’ve never understood the inferiority complex.

A quote from observer:

Perhaps there is a technical reason for this decision. Less than 3 years though? Can hardware be obsolete that fast?

Here is what I can say. Nothing will get people to buy new phones like when you come out with a new operating system with great new features that will only work on the new devices. You want these awesome Nouget 7.0 features? You will need to get a new phone.

Frankly I find it absurd that a less than 3 year old device could somehow be made obsolete. This is a big deal because the whole idea of getting a Nexus device in the first place is because Google will take care of you. Get updates first before everyone. Now the life span of the support is put into question.

If this turns out to be true I will be hard pressed going into a store or going online to buy a Nexus phone. There is a sense of betrayal. What I really need is the “why” it wouldn’t be updated. If Google can explain the technical details as to why the Nexus 5 will become a dud in less than 3 years, then I might reconsider. If the Nexus 5 hardware is the issue, then will Google address this as being a design failure? 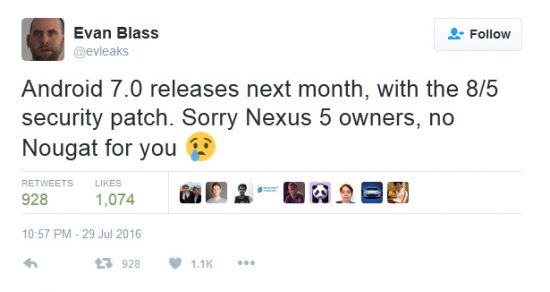