I have some sad news to report here folks. The height of happiness upon receiving my Nintendo Switch to the crush of breaking it only 6 days later.

Sadly this was a situation of the dreaded Switch drop. This was not a test. This was not part of a clever YouTube drop test  video. This was simply an accident.

Before you tell me, “just don’t drop it dummy!”, hear me out because you need to be aware.

Sure you will see some drop test videos on YouTube in which the Switch survives. I can tell you that the Nintendo Switch is far more durable from a drop when it lands flat. This is simply physics. Here are a couple screenshots from a YouTube drop test video. 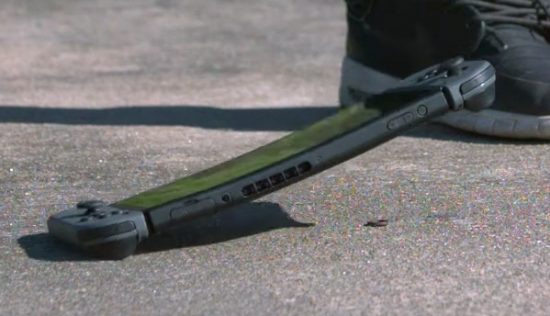 You can see in the drop test screenshots [source] that there is a lot of bending going on when it hits the ground. Yes those are images showing a bending Switch as it hits the ground. Not a bad thing but it does indicate that it’s a heavy enough device to cause significant flex when dropped. In that drop, it’s almost perfect (a lucky drop) in the sense that it lands flat. By landing flat the weakest part of the unit is not being tested. Can you guess the weak points?

In my case, I believe construction shortcomings are evident. It’s clear that if you drop the Switch (with joy-cons attached) and the principle point of contact with the ground is a joy-con, the entire weight of the tablet puts too much stress on the minimalist nature of the connection. In other words, the connection point between the joy-con to the Switch are the weak point. A breaking point as it were.

Ultimately when it comes down to dropping and having a device surviving a drop, it just a question of how lucky you are. The angle, the surface and the height of the drop all contribute to the end result.

So my Switch fell. It fell on my kitchen linoleum floor and you can see results here: 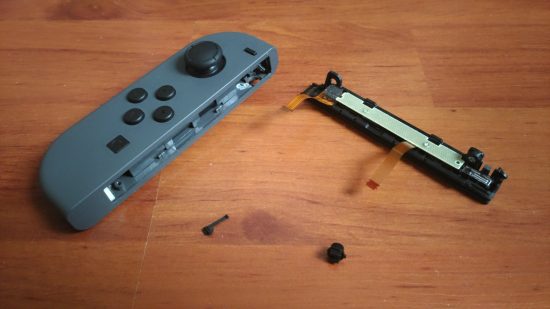 The left joy-con detached from the main tablet/console but in a ripped out way. As in, it detached thanks to brute force and it’s simply broken badly. A drop of super glue isn’t going to save the day here.

Here is the core issue at play. The Switch tablet is heavy by tablet or smartphone standards. It’s just chunky. So when you consider the slim plastic connection for the joy-con to tablet combined with the heavy weight of the Switch tablet, a drop is going to most time result in a joy-con breaking off. So in a sense the joy-con is like a really expensive bumper case. Afterall, cracking the Switch screen is a far worse dilemma. 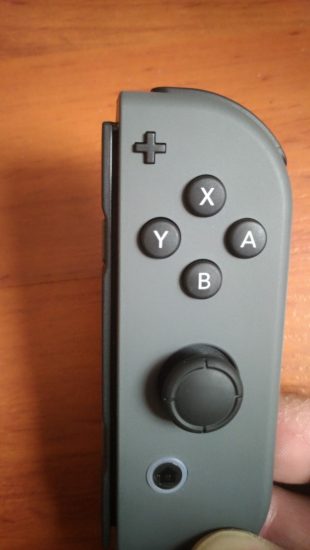 See that black piece of plastic? That’s not going to provide a lot of strength when the weight of the Switch lands on it. 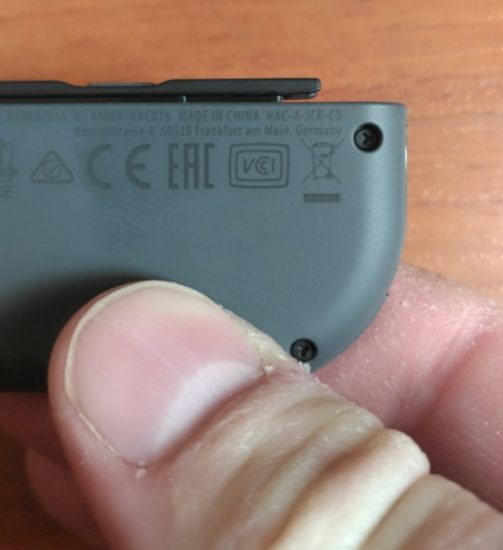 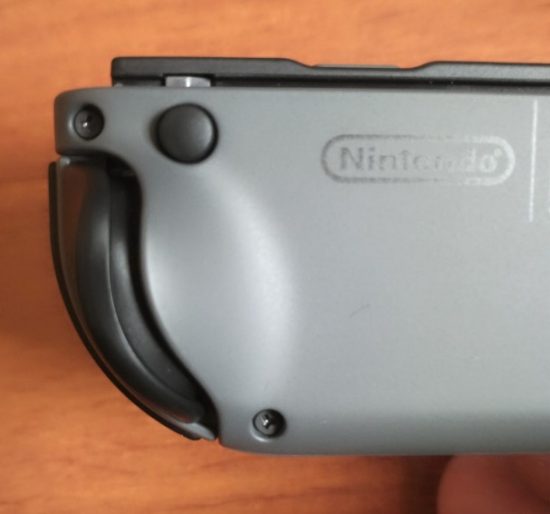 I will say this though. As a mobile device, the Switch is going in and out of vehicles, pockets and across various environments. Dropping a Switch is going to be far more frequent than most any other device. The issue though is that it’s not built rugged. It’s not tough and the weight of the Switch tablet is going to really put those connection parts to the test. Time will tell us just how durable the Switch is or if my story will be an often repeated one.

First off, I love Best Buy because I’ve had some very favorable returns and exchanges in the past. However this is the first time that I’ve had to step up to the customer service counter with a dropped damaged product. I brought along my baggie with broken pieces along with my sad face. As compassionate as they could be, there was next to nothing Best Buy could do for me.

So I stood at the Best Buy counter with a dilemma. It’s $99 for a set of left and right joy-con controllers. It was that or have to order online the left joy-con for $65. See the decision to be made? Pay less for one, or get two for cheaper. Hoping that the extra right joy-con comes in handy in the future. The decision was made. I bought the $99 pair which meant I could walk out of Best Buy and continue playing Zelda that same day. By the way, the protection plans offered by Best Buy wouldn’t have helped in this instance. You drop? You on your own bro.

Fast forward to the day after the Best Buy visit. I decided to call Nintendo support. That call was fast, friendly and efficient. I’m now able to get the left joy-con repaired for $30. A nice price compared to $65 for a new one. Normally this is a $10 shipping on top, but Nintendo was kind to me and additionally, there is a drop off option available. I’ve used Nintendo repair many times in the past years to replace the Nintendo 64 thumbsticks and it has been an excellent solution and fairly cheap to have done. Also note that the $30 fee would apply if you wanted the buttons or thumbsticks repaired in the future. A repair is a more affordable option than $65 for a new joy-con so keep this info in mind!

So think of this situation now. Nintendo is going to get even more money out of me! Afterall, when the left joy-con is repaired I will have 2 sets but only one joy-con grip. So I might as well buy another grip for either $40 for the charge one, or $20 for the non charge one. Of course I need the charge one because the only charge option is to have them connected to the switch tablet. This all sounds crazy and it is.

So at the end of the day, I’ll be spending $99 + $30 + $40 to deal with this scenario. This cost on top of the $399 I spent on the console. Sure I could have not repaired the broken left joy-con, but that seems pointless. At the end of the day I will have 4 joy-cons and 2 full fledged controllers. This should be all I need, except for the games!

2 Responses to I broke my Nintendo Switch in just 6 days – See what a dropped Switch looks like.