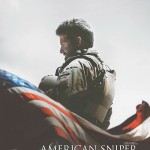 American Sniper is essentially the life story of Navy SEAL sniper Chris Kyle. Don’t be misled, American Sniper, is not an action film. Indeed there are action sequences, but acting and drama plays a bigger part of the movie. American Sniper sits somewhere between good and average. It’s not a stellar action military style movie and as a drama, it’s mediocre. My feelings are that it’s not a great movie, but rather it’s just an okay movie.

The story moves over a vast amount of time and the result of that is a lack of real identity. American Sniper doesn’t really know what it wants to be. There are messages that are trying to be conveyed to the audience, but as those aspects of the movie are being covered, an action sequence would get in the way, only to return back to the message after another point in time. It’s a back and forth affair.

If you don’t know the story of the American Sniper, be assured that the movie isn’t on point in that regard. It’s a movie and there needs to be a formula. In this case, there sure was some molding of the story in order to make it compelling. I just feel that the message of the movie got watered down because it was too fragmented.

I mentioned that the movie covers an incredible amount of time. This generally means that characters, relationships, and character reasoning/decision making becomes less compelling. Less time learning about the characters and their early beginnings means it doesn’t quite grab you the same. There is emotion in this movie, which is touching at times, but it could have been greater than it was. The acting is solid and compelling at times and is certainly the strongest aspect of American Sniper, the movie.

If you’ve read the book or know this story, then don’t expect accuracy. Rarely do movies keep things as they were, and American Sniper, the movie, is no different. If you don’t know the man behind the story, then accuracy won’t be such a let down, at least until you read the book afterwards or start watching interviews with the man known as the American Sniper. Movies apparently need to embelish, which does take away authenticity, which is what we have in this movie.

So ultimately you want to know whether American Sniper is worth watching. I would say yes, but it shouldn’t be at the top of your list. I wouldn’t go running to get the blu ray release. It’s a decent movie that doesn’t quite know what it is. It’s many things, but it’s not great at one particular thing. It’s about as medium as you can get.