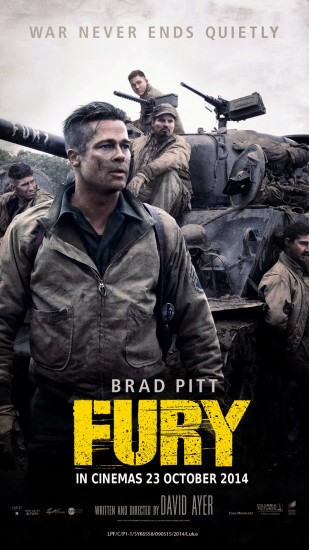 Fury is a war movie that suffers from being in a competitive genre in which there are far more engaging and inspiring competitors. Fury is a below average war movie. The acting is poor, the story is uninspiring, and the message is virtually non-existent.

Certainly if you look at the marketing materials, Fury appears to be a compelling and unique war film. You certainly can’t find a lot of movies in years past that focus on tank personnel. To be honest, it was the trailer for Fury that piqued my interest to the point of actually watching it. In the end, the short opening sequence of the movie and the trailers were more satisfying than the movie itself.

Fury fails in many ways. The characters are not compelling and the acting doesn’t help us care or become emotionally invested. The story doesn’t do anything to bring you into their world.

Since this is a war movie, it’s largely action based, but on that front (no pun intended) it also doesn’t deliver. As I mentioned, there are plenty of absolutely incredible war movies that exist and ultimately if you have seen any of those, you can’t help can use them as a measuring stick. I won’t give this away, but I literally LOL’ed at certain points during battle sequences. If you see the movie, please comment below because I want to know if you had the same reaction I did. I understand the role that CGI plays in movies, but some aspects of the battle scenes were absurd.

Perhaps Fury suffers from a lack of funding to really bring the realism to the film. There was a bit too much polish and “fake” for my tastes. Explosions, bullets, equipment, props, it all plays a part in how believable the story becomes. Fury just couldn’t deliver enough realism.

Fury tried to touch on the human element of the war, which essentially ate up a lot of time and didn’t deliver anything compelling in terms of drama. The problem really was is that the movie didn’t have a clear direction or plot. You should be able to say what a movie is about, but with Fury, telling you what this movie is about would just be an incomplete sentence.

If Fury stayed with being a straight action war movie, based on the experiences of a tank crew, then it could have been more compelling. Too much of the movie got sidetracked on drama, which for this movie, was wasted time. I wouldn’t recommend this movie, ultimately because there are far more better options that exist already. Your time is valuable and unless you have spare time to waste, Fury is best left for the hardcore Brad Pitt fans.

Asus ZenPad Tablets 2015, Pre Order, Where To Buy [Updated]
Samsung Galaxy S6 is coming. Does anyone care? Full details for those that do.